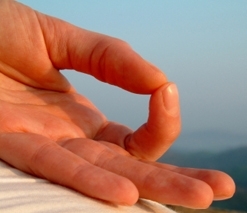 The word Yoga comes from the root Yuj which means to join therefore it is the union of the body mind and spirit. This is possible through the quieting of the fluctuations of the mind when eventually one experiences the union of the individual soul with the Supreme Soul. It is a holistic science and philosophy that covers every level – physical, mental and spiritual. It is a practical method for making life purposeful, useful and noble.

The Yoga Sutras of Patanjali are one of the six darshanas (philosophies) of Hindu schools of philosophy and a very important milestone in the history of Yoga. Originally, as with other ancient texts, these teachings were oral and were explained and interpreted by commentaries from a teacher guiding the student. According to these Sutras (196 aphorisms) or “threads”, there are eight limbs of yoga as mentioned below:

Thus the main focus of Patanjali Yoga Sutras is to control the mind and subdue its fluctuations called ‘chitta vrittis’. To do so these eight means should be followed in the order set so the mind can become calm and peaceful and one gets established in his own true nature.

There are different paths of yoga, all which ultimately lead us to the same truth.

This is the most practiced path using asanas (postures), pranayama (breathing techniques), mudras (body gestures) and shatkarma (six cleansing procedures). Hatha yoga (Ha-sun and tha-moon) focuses on the “yin-yan” effect that successfully brings about the union of the body, mind and spirit.

Raja or the King of yoga is the highly revered path to enlightenment through the control and mastery of the mind.

Jnana Yoga – The Yoga of Wisdom

Jnana or “knowledge” is at an intellectual basis. It is about enquiry of one’s true self so to transcend the mind’s ego and ultimately become one with Atma (soul). This is done through mental techniques of self enquiry, reflection and conscious illumination as defined in the four pillars of thought namely discrimination (viveka), vairagya (detachment), Shatsampat (six virtues) and Mumukshutva (yearning).

Bhakti Yoga – the Yoga of Devotion

Bhakti means devotion or love for the Divine. This is the fastest route to salvation. Whilst Hatha Yoga requires a strong flexible body, Jnana yoga the intellect, Raja Yoga a disciplined mind, Bhakti Yoga only requires one to have an open and loving heart.